The Geluk (dge lugs) tradition follows the teachings of the fifteenth-century scholar monk Tsongkhapa Lobzang Drakpa. Like the Kadam tradition which the Geluk absorbed and supplanted, the Geluk place an emphasis on monastic discipline and scholarship, central to which is the their understanding and explication of the Mādhyamaka Prāsaṅgika philosophical position. They also maintain a strong, if somewhat less public, tradition of tantric transmission, scholarship, and practice. Followers of the Geluk tradition practice an extensive system of Lamrim and Lojong, both of which have their origins with Atisha and the Kadampa tradition. The Geluk also maintain a lineage of Mahāmudrā teachings. The primary tantric teachings studied and practiced in the Geluk are the tantric cycles of Yamāntaka, Cakrasaṃvara, and Guhyasamāja. The Kālacakra Tantra is also commonly practiced among many Geluk practitioners, as is the tantra of Vajrayoginī. The Geluk tradition became the dominant religious order in Tibet in the seventeenth century when the Fifth Dalai Lama, with the aid of the recently converted Mongols, orchestrated a defeat of the Kagyu king of Tsang and set himself up as political leader of Tibet. Since that time the Dalai Lamas' seat of government, the Ganden Podrang, has been the nominal seat of political power in Tibet, even if for most of the last four hundred years real power shifted among a number of players. 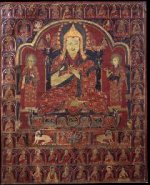 A painting of Tsongkapa, founder of the Geluk tradition, with the two principal students, Gyaltsab on the left and Khedrub on the right. 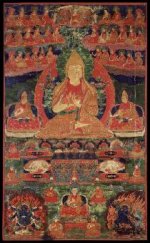 Tsongkhapa, founder of the Geluk tradition, with the two principal students, Gyaltsab on the left and Khedrubje on the right.

The Seventh Dalai Lama, Kelzang Gyatso, along with a selection of the previous incarnations according to the Kadam Lekbam. 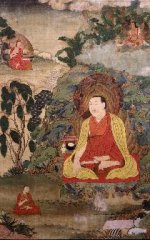 The Potala Palace and the Main Monuments of Lhasa

This painting shows major sites of Lhasa including the Jokhang, Potala Palace and Lukhang. The monasteries of Sera, Drepung, and Sangpu Neutok are also pictured. It is possible that the image depicts activities during Losar festivities.

An eighteenth century painting of The Fifth Dalai Lama pictured with major scenes from his life. 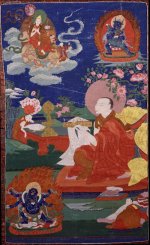 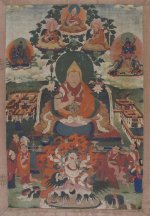 A nineteenth century painting from Tibet of the Eighth Tatsak with prominent Geluk figures. 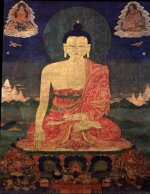 The central figure of Shakyamuni Buddha is shown with Tsongkhapa and primary disciples in the upper left corner. Below are protector deities. 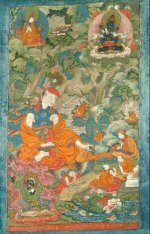 The important translator Go Khukpa Lhetse is the central figure of this 19th century painting, with Atiśa depicted above. 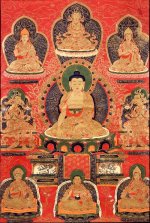 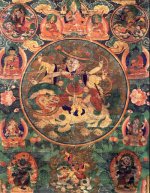 The protector deity Pehar Gyelpo is depicted with three Geluk masters above.