The Sakya (sa skya) tradition was founded by Khon Konchok Gyelpo in 1073, a date marked by his founding of Sakya temple in the Sakya valley in Tsang. Konchok Gyelpo’s son Sachen Kunga Nyingpo combined his Khon family’s lineage of Yangdak and Vajrakīla, which his ancestor Khon Lui Wangpo received during the Imperial era, with new teachings. These include the Sakya Lojong teachings of the Zhenpa Zhidrel (zhan pa bzhi bral), obtained in a vision of Manjuśrī, and the Lamdre teachings that are based on the Hevajra tantra. The Sakya Lamdre teachings were transmitted by the Indian Mahāsiddha Virupa via a long line of teachers to the Tibetan yogin Zhangton Chobar, who transmitted them to Sachen. Sachen also received Cakrasaṃvara, Vajrabhairava, the Vajrayoginī of Nāropa, and Pañjaranātha Mahākāla from Mel Lotsāwa Lodro Drakpa. Sachen’s two sons, Sonam Tsemo and Drakpa Gyeltsen were the next to lead the temple. Drakpa Gyeltsen’s nephew, Sakya Paṇḍita Kunga Gyeltsen, one of the greatest scholars of his day, was the fourth in the lineage. The fifth was Sakya Paṇḍita’s nephew, Pakpa Lodro Gyeltsen, who traveled with his uncle when the Mongolian leader Godem Khan summoned him. In 1253 Pakpa met Qubilai Khan, who three years later conquered China and initiated the Yuan Dynasty. Borrowing from Tangut-Kagyu alliance of the previous century, Qubilai and Pakpa entered into a relationship of “patron and priest,” with Pakpa being made guoshi, or Imperial Preceptor. With Mongolian support, the Sakya Khon family ruled Tibet until the rise of the Pakmodru Dynasty in the middle of the fourteenth century. Three branches of the Sakya tradition are the Ngor (ngor), founded by Ngorchen Kunga Zangpo and based at Ngor Evam Choden monastery, and Tsar (tshar), established by Tsarchen Losel Gyatso and based at Dar Drangmoche. The Ngor tradition became influential in the dissemination of the Sakya tantric teachings, and the Tsarpa in the esoteric transmission known as the Lobshe, which contrasts to the more widely taught Tsokshe, both being teaching traditions of Lamdre. A third branch is the Dzongpa, which is based at Gongkar Chode in Gyangtse. There are several independent institutions that share Sakya doctrinal tradition, including Jonang (jo nang), Bodong (bo dong), and Bulug / Zhalu (bu lugs / zhwa lu), and which are frequently considered part of the Sakya tradition. 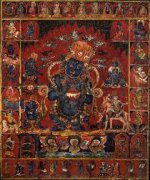 Panjarnata Mahakala is the protector of the Hevajra cycle of Tantras. The iconography and rituals are found in the 18th chapter of the Vajra Panjara (canopy, or pavilion) Tantra, an exclusive 'explanatory tantra' to Hevajra itself. It is dated to the late fourteenth or early fifteenth century. 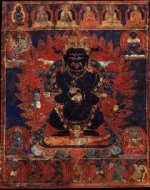 Mahakala surrounded by the stylized flames of pristine awareness and emanating forth from the licks of flame are messengers in the shapes of various animals, black crows, black dogs, wolves, black men and women. 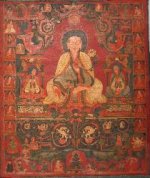 A painting of Sachen Kunga Nyingpo. 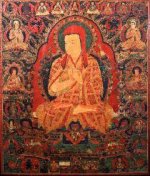 Ngorchen Kunga Zangpo, the founder of the Ngor Branch of the Sakya tradition. 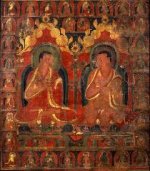 Ngorchen Kunga Zangpo at the left and his successor Muchen Sempa Chenpo Konchok Gyaltsen sitting on the right, surrounded by lineage teachers. 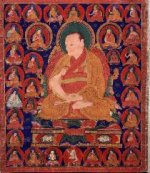 Buddhashri surrounded by the lineage teachers of the Yogachara tradition of Buddhist philosophy. He was the principal teacher of Ngorchen Kunga Zangpo, the founder of the Ngor branch of the Sakya tradition. 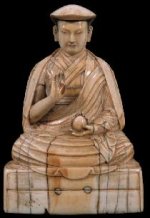 An ivory statue of Lhachok Sengge. The inscription on the base of the statue reads "rgyal ba lha mchog seng ge." 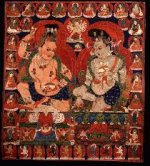 Damarupa and Avadhutipa, two Indian Siddhas. On the left is the siddha Damarupa holding upraised in his right hand a damaru drum and a skullcup in the left. On the viewer's right is Avadhutipa holding a skullcup to the heart with the left hand and pointing downwards with the right hand. 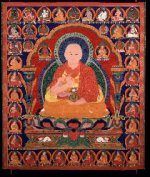 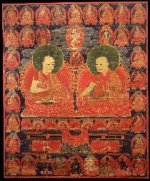 Two men, Kunkhyen and Jamyang Chokyi Gyalpo. This painting is from a set of compositions that appears based on similar paintings identified as a Sakya Lamdre Lineage set. The secondary lineage that starts at the top left and proceeds down the right and left registers is possibly the Prajnaparamita Lineage beginning with Shakyamuni Buddha. 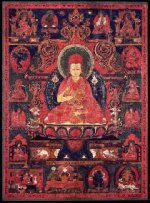 Sanggye Sengge, the eleventh throne holder of Ngor Ewam Monastery is the main figure in this work, created between 1550 and 1560. It is in the Menri style with Beri elements. 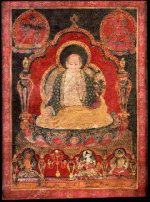 A portrait of Sachen Kunga Nyingpo in the classic Beri style. Based on stylistic comparison, it is likely from the fourteenth or fifteenth century. 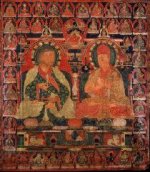 Drakpa Gyaltsen and Sakya Pandita, uncle and nephew, teacher and student surrounded by the lineage Kings of Shambhala. This composition belongs to a larger set of paintings depicting the Lamdre Lineage of the Sakya Tradition of Tibetan Buddhism in a two figure per composition configuration. 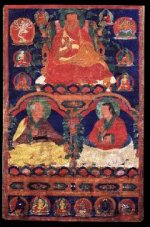 Shangton Chobar with Sachen Kunga Nyingpo on the middle left, Sonam Tsemo on the right. 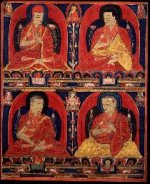 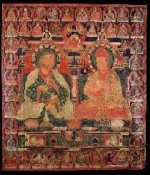 Drakpa Gyeltsen and Sakya Pandita, uncle and nephew, teacher and student surrounded by the lineage Kings of Shambhala. This composition belongs to a larger set of paintings depicting the Lamdre Lineage of the Sakya Tradition in a two figure per composition configuration. 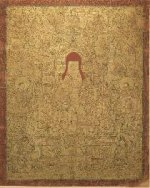 Sakya Lotsawa with his teachers 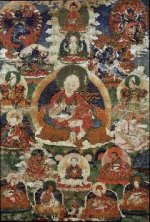 Wangdu Nyingpo and other masters

Wangdu Nyinpo was the Twenty-ninth Sakya Tridzin. This painting gives visual representation to his previous incarnations, which include Padmasambhava, and some of his disciples.

A sculpture of Lowo Khenchen 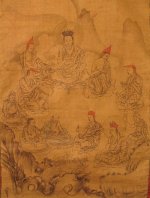 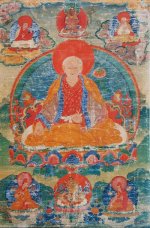 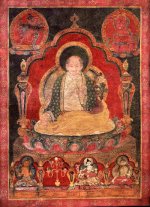 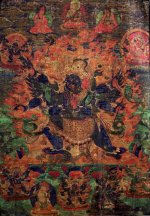 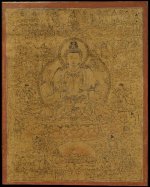 This sixteenth-century thangka of Avalokiteśvara depicts the teaching lineage named for Tsembupa known as 'tshem bu lugs', one of the five great systems of Avalokiteśvara practice in Tibet. This system is well preserved in Geluk and Sakya traditions.