The Kadam (bka’ dam) tradition was the first of the so-called New Schools of Tibetan Buddhism, traditions that arose during the Second Propagation of Buddhism in Tibet in the tenth century. The Kadam tradition began with Dromton Gyelwai Jungne, a disciple of the Bengali teacher Atiśa Dīpaṃkara, who had been invited to Tibet by the kings of Purang in western Tibet to revitalize monastic Buddhism there. Dromton founded the monastery of Reting and propagated the Lamrim and Lojong teachings, which lay out a complete path to Buddhahood and means of training the mind, respectively. The Kadam teachers were known for their monastic discipline, a character that was adopted by the Geluk tradition that supplanted it in the fourteenth century, adopting its teaching and absorbing its monasteries. 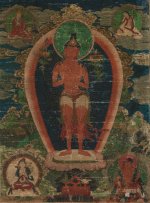 This eighteenth century painting of a Bodhisattva depicts Atiśa and Kadam founder Dromton on the top (left and right). Tara and Jambala are pictured along the bottom. Dromton is considered an emanation of Padmapani Avalokiteśvara, who is the central figure in this image according to some sources. However, the presence of a sword and book suggests that the central figure is Mañjuśrī. 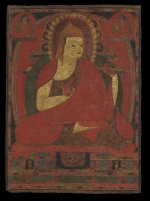 This painting of Atiśa is from the early to mid twelfth century and features extensive inscriptions on the reverse side. 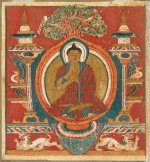 This prayer card dating to around the year 1000 is from Toling in Western Tibet. It depicts Śākyamuni Buddha in a preaching posture.