The Drukpa Kagyu tradition was founded in the twelfth century by Tsangpa Gyare, a disciple of Lingrepa, himself a student of Pakmodrupa. The tradition draws its name from a vision Tsangpa Gyare had of nine dragons – druk in Tibetan. The principal seat is at Ralung, in Tibet, the seat of the Gyelwang Drukchen, head of the Tibetan branch of the tradition, which is made up of the Upper, Middle, and Lower Druk, following the transmission lines of three of Tsangpa Gyare's disciple: Gotsangpa, Wonre Darma Senggye, and Lorepa, respectively. The tradition split again in the late sixteenth century when there were two rival candidates for the reincarnation of the Fourth Drukchen, Pema Karpo. Paksam Wangpo, the candidate favored by the King of Tsang, became the Fifth Drukchen, and his rival, Zhabdrung Ngawang Namgyel went south and created the modern state of Bhutan. His incarnations, the Drukpa Zhabdrung, head the Bhutanese tradition, with their appointed regents occupying the office of the Je Khenpo. 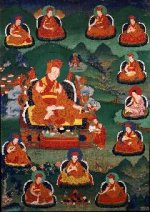 A magnificent eighteenth century painting depicting Gampopa with a number of early Drukpa Kagyu masters, including early abbots of Ralung Monastery and several of the "Nine Incomparable Lions." 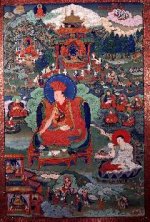 This eighteenth century painting of Namkha Pelzang, the twelfth abbot of Ralung Monastery, belongs to a set of Ralung patriarchs. Two other paintings belonging to the set can be seen on Himalayan Art Resources. 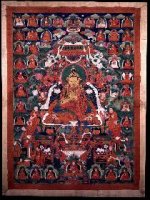 Nineteenth century painting of the Drukpa Kagyu lineage of Bhutan. 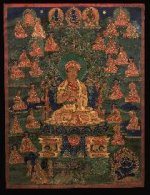 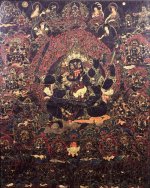 The central figure of Mahakala is depicted with historical figures including Nāgārjuna and Ga Lotsāwa, as well as masters of the Drukpa Kagyu lineage.