The Drigung Kagyu tradition was initiated by Jikten Gonpo, a disciple of Pakmodrupa, upon the establishment of Drigung Til Monastery in 1179. One of the largest and most influential Kagyu sub-traditions, it briefly vied with the Sakya for control of Tibet during the thirteenth century. Originally led by the Kyura clan, since the seventeenth century it has been headed by the Drigung Chungtsang and Drigung Chetsang incarnation lines. The tradition is particularly strong in Ladakh.

Chakrasamvara, Sahaja Heruka, with the footprints of Drigungpa Rinchen Pel. 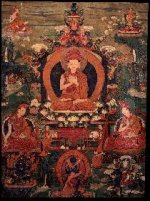 This sixteenth century painting shows the Drigung founder, Jikten Gonpo, with two men who stood at the beginning of the two main incarnation lines at monastery, the Drigung Chetsang and the Drigung Chungtsang. 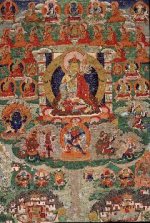