Bon (bon) is often said to be the indigenous religion of the Himalayan region, preserving beliefs and practices that predate the introduction of Buddhism. The Bon teachings are said to have originally come from a land known as Tazik, introduced to human beings by the enlightened being Tonpa Shenrab, and flourished in the kingdom of Zhangzhung on the western Tibetan Plateau. During the Tibetan Empire, when Buddhism was adopted in Tibet, native priests lost their status, and their practices, some of which were later absorbed into some Tibetan Buddhist traditions, were suppressed. In the centuries following, the surviving adherents to the tradition organized monastic centers, and Bon revealed scriptures were produced that integrated altered versions of many of the ideas and practices brought to Tibet by the Buddhists, resulting in a tradition known as "New Bon." There remains today a pernicious prejudice against Bon in Tibet, and a tenacious belief that Bon is merely a form of Buddhism. 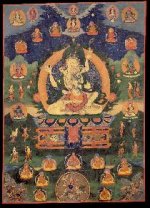