The Gungtang incarnations is a Geluk line based at Labrang Monastery in Amdo. In the early eighteenth century, the Second Gungtang Ngawang Tenpai Gyeltsen  was recognized as the reincarnation of the Fiftieth Ganden Tripa, Gendun Puntsok, also known as Tri Gungtangpa. The Gungtang line has its primary seat at Labrang Tashikyil, where most of the Gungtang lamas have been abbots. The Third Gungtang, Kunchok Tenpai Dronme was especially famous all over Tibet for his scholarship.

Gendun Puntsok, a disciple of the First Jamyang Zhepa, served as the Fiftieth Ganden Tripa from 1714 to 1721. He was educated in Drepung Gomang and Gyume Colleges. He was famed as an accomplished tantric practitioner, said to have transformed the Silver Reliquary of Tsongkhapa into Gold with his miraculous skills, for which he was rewarded by Lhazang Khan. His subsequent incarnations are known as the Gungtang Lamas.

The Second Gungtang, Ngawang Tenpai Gyeltsen was a Geluk scholar who studied in Drepung and Labrang Tashikhyil, where he served as the fifth abbot and eighth throne holder, respectively. He visited the Manchu Emperor who honored him with the Mongolian title Hutuktu, one of only eight Tibetan lamas who held the title. The Fifth Paṇchen Lama identified him as the reincarnation of the Fiftieth Ganden Tripa, who was known as Tri Gungtangpa after the name of his initial monastic seat, Gungtang Chode. He sponsored and commissioned a set of the Tengyur and one hundred copies of the Aṣṭasāhasrikā Prajñāpāramitā written in silver, together with many other objects of faith, for Labrang Monastery.

The Third Gungtang Lama Konchok Tenpai Dronme was identified as reincarnation of the Second Guntang Ngawang Tenpai Gyeltsen. He studied in Drepung Gomang College near Lhasa and Labrang Tashikhyil in Amdo, and later he served as the twenty-first abbot of the monastery. He also served as the first abbot of Ngawa Gomang Monastery. Familiar with Chinese and Mongolian languages, he spent most of his life in teaching and composing texts on many subjects such as ethics and medicine as well as religion.

The Fourth Gungtang Lama, Konchok Tenpai Gyatso was a Geluk scholar who received his basic education presumably in Labrang Monastery in Amdo and furthered his studies in Drepung Monastery. He served as the Forty-eighth throne holder of Labrang Monastery and reformed the system of education and also codes of disciplines in the monastery.

The Fifth Gungtang Lama, Jamyang Tenpai Nyima studied in Amdo and served as the Sixty-ninth throne holder of Labrang Monastery. He travelled widely and gave extensive teachings in Mongolia.

The Sixth Gungtang Lama, Jigme Tenpai Wangchuk served as the throne holder of Labrang Monastery from 1954 to 1958, and again in 1990. He was imprisoned for twenty-one years and spent his time in the labor-camps until his release in 1979. Following his release from prison he was instrumental in the revival of religious activity at Labrang and Amdo, and he spoke openly about his devotion to the Dalai Lama and his longing for a Tibet free of Chinese rule. In 1994 he gave his tenth and the last Kālacakra empowerment to a gathering of over many thousands of followers at Labrang; he died in a hospital in Beijing in 2000, in a manner that many followers continue to consider suspicious. 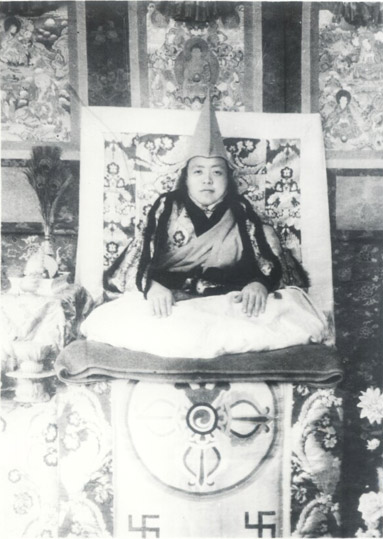