Samye, Tibet's first monastery, was likely completed in 775 and inaugurated in 779, although the Tibetan historian Buton gives construction dates of 787-799 and the Tang Annals state it was built in 763. The Indian pandita Śāntarakṣita of Zahor was invited to Tibet by King Tri Songdetsen in order to establish the monastery, and, according to legend, Padmasambhava was brought in to subjugate local deities that opposed its construction. It is believed to have been constructed as a representation of Mount Meru using the Indian Buddhist temple of Odantapurī, a Pala dynasty monastery in present-day Bihar, as a model. The name Samye (bsam yas), meaning "inconceivable" is said to derive from its being even more glorious than Tri Songdetsen had hoped for. According to Tibetan and Chinese sources, in about 797, a great debate was held at Samye between proponents of Indian and Chinese Buddhist perspectives. The Indian view prevailed, greatly influencing the subsequent development of Buddhism in Tibet, although Chinese influence continued.

Samye was a vibrant institution, with great religious and political influence, from its founding up to the tenth century, after which its influence waned under Kadam, Sakya and eventually Geluk control. The monastery remains a very important pilgrimage site and a symbol of Tibet's national identity, in which Nyingma, Sakya and Geluk schools all have strong interests. The original buildings of Samye are no longer intact, having suffered damage and destruction several times over the centuries, but after each round of destruction, Tibetans have endeavored to restore the monastery. Notable renovations have been carried out by Ra Lotsawa in the eleventh century, the Seventh Dalai Lama Kelzang Gyatso in the eighteenth century and the Tenth Panchen Lama in the twentieth century. 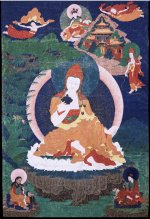 This 18th century painting depicts Padmasambhava as a monk surrounded by several disciples and Jigme Lingpa above his head. Samye, one of Tibet's first monasteries, is also pictured. The piece is based on a set of paintings from Bhutan; it was commissioned by the Fourth Druk Desi, Gyalse Tendzin Rabgye.

We Wish You a Happy Year of the Earth-Rat.

We're grateful for your interest and support of The Treasury of Lives. If your circumstances allow, consider making a gift to help us add new bios, expand our map, and annotate more paintings. Every gift, no matter the size, makes a very big difference.