The Zhije (zhi byed) and Chod (gcod) lineages weave in and out of almost all institutionally independent traditions of Tibetan Buddhism, although they themselves never became the established dominant tenet system of any monastery. The Zhije lineage in Tibet originated with the Indian master Padampa Sanggye, who is said to have visited Tibet five times. He had a number of disciples in the Tingri area of Tibet, to whom he taught his method of pacifying suffering. Padampa Sanggye also taught a method for cutting through demonic obstruction to his relative Kyoton Sonam Lama, who transmitted it to Machik Labdron. Her lineage of Chod, which she passed down to her children, came to be known as “Mother Chod” in contrast to the lineage stemming from Padampa Sanggye, which is known as “Father Chod.” Additional Chod developed, including one stemming from treasure revelations (“Treasure Chod”), the Gyeltang Chod, stemming from Machik Labdron’s disciple Gyeltang Samten Ozer, and the Zurmang Chod, transmitted by Rangjung Zhabla Ngawa. 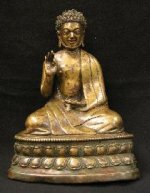 An early statue of the twelfth century adept Padampa Sanggye