The Taklung Kagyu tradition was established by Taklungtangpa Tashi Pel, a disciple of Pakmodrupa Dorje Gyelpo, who founded Taklung Monastery in 1180. In 1276 Sanggye Won, who was forced from the abbacy of Taklung Monastery, went to Kham and established Riwoche, which became a second seat of the tradition.Beginning in the fifteenth century, Taklung Kagyu began to be strongly influenced by Nyingma teachings. 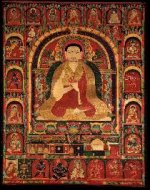 A portrait of Taklung Tangpa Tashi Pel with the basic Kagyu lineage, dating to the thirteenth century. 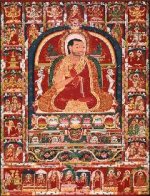 Pakmodrupa Dorje Gyelpo. One of the three principal students of Gampopa and teacher to many patriarchs of Kagyu sub-traditions. 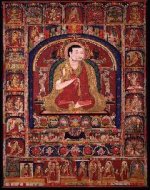 Pakmodrupa Dorje Gyelpo, one of the three principal students of Gampopa.

Every day people from all around the world access The Treasury of Lives. Reader donations allow us to keep the site freely accessible for all.
If your circumstances allow, please consider making a tax-deductible donation to enable The Treasury to stay online and continue to expand.
Every donation truly helps!