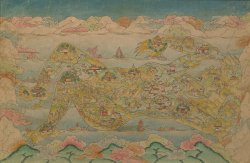 The Treasury of Lives' dynamic map was first launched in 2014 and replaced with a fully redeveloped resource in February 2019 with the support of the National Endowment of the Humanities (Division of Preservation and Access, Humanities Collections and Reference Resources Planning Grant) and under the advisement of Tsering Wangyal Shawa, Geographic Information Systems (GIS) and Map Librarian at Princeton University Library.

The new resource features places that are associated with people whose biographies have been published on the site. These include monasteries, temples, schools, manor houses, lakes and other features of cultural geography of the Buddhist world. The map will grow more detailed as more biographies are published. The map is in continuous development with new components being planned, including enhanced person-maps, and printable maps with user curated coordinates. Some features of the new resource include:

The Map Search feature is intended to be inclusive, aggregating both spelling and name variants, as well as Wylie, Tibetan and Chinese scripts. Not every place mentioned on the Treasury is as yet located on the map; the Treasury references many names of monasteries and towns, the coordinates for which we have not been able to find. If you have coordinates for any such places, or find errors in our current coordinates, please let us know. We welcome user contribution to our data, whether of historical information, alternate names, images or photographs, or other information. We are also happy to provide geodata to users for their own projects. If you need a static map, feel free to get in touch to see how we can help.

The map is created using Mapbox GL, a JavaScript library that uses vector tiles, which display rapidly and cleanly at all zoom levels. Tibetan fonts are as yet imperfect, and you may notice certain letters not stacking properly. However, we have been advised that Mapbox will address these issues in the near term. We recommend users contact Mapbox (https://support.mapbox.com/hc/en-us) to encourage them to improve their Tibetan script rendering.

Tsering Wangyal Shawa's Tibet Map remains an essential resource that provides a comprehensive index of townships and place names in English, Tibetan script, Wylie, Chinese and Pinyin. It is available for purchase here.

Information for sites in Lhasa is in large part derived from the work of the Andre Alexander and the Tibet Heritage Fund.
Temples of Lhasa
The Traditional Lhasa House

Another invaluable resource with detailed descriptions, location data, rare historical photographs, is Matthew Akester's Jamyang Khyentse Wangpo's Guide to Central Tibet, published by Serindia and available for purchase here. We are grateful to Matthew Akester for allowing us to display images from this incredible contribution to Tibetan Geography.

The Footprint Guide to Tibet by Gyurme Dorje provides a wealth of information on places across the Tibetan plateau. The latest edition is bizarrely out of print, but can be purchased at numerous bookstores, such as Namse Bangdzo.